22035329: On 6/24/22 at approximately 10:04 AM, a male party entered the station and reported that the day prior, a male party known to him broke into his house in the area of Highland Ave & Waldo St. Nothing was reported missing.

22035626: On 6/25/22 at approximately 5:38 PM, Somerville Police responded to Dilboy Field for report of an assault. Upon arrival, officers spoke with two juvenile victims who stated they were confronted by two juvenile males who threatened to fight them. During the confrontation, one of the juvenile suspects brandished a knife and started slashing it in the air.

22035544: The Somerville Police are interested in speaking with the individual shown below in relation to a residential breaking and entering that occurred at a residence on Fremont St on 6/24/22. The person of interest was described as a white male in his 40s with dark hair, goatee, grey t-shirt and black shorts. Anyone with information is asked to please contact the Somerville Police at 617-625-1600. 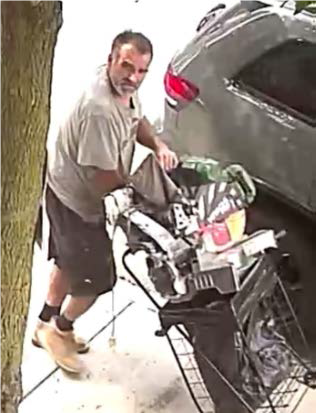 22035397: On 6/24/22 at approximately 4:03 PM, Somerville Police responded to a residence on Webster Ave for report of a past attempted breaking and entering. Upon arrival, officers spoke with the reporting party who stated that a couple hours prior, she heard someone attempting to open her door.