This Beyond The Call of Duty Award is based on a recommendation from Officer Anthony Manzelli, and from an in-depth conversation with Mr. George Mihos, the ownder of Tech Auto Body in Union Square. 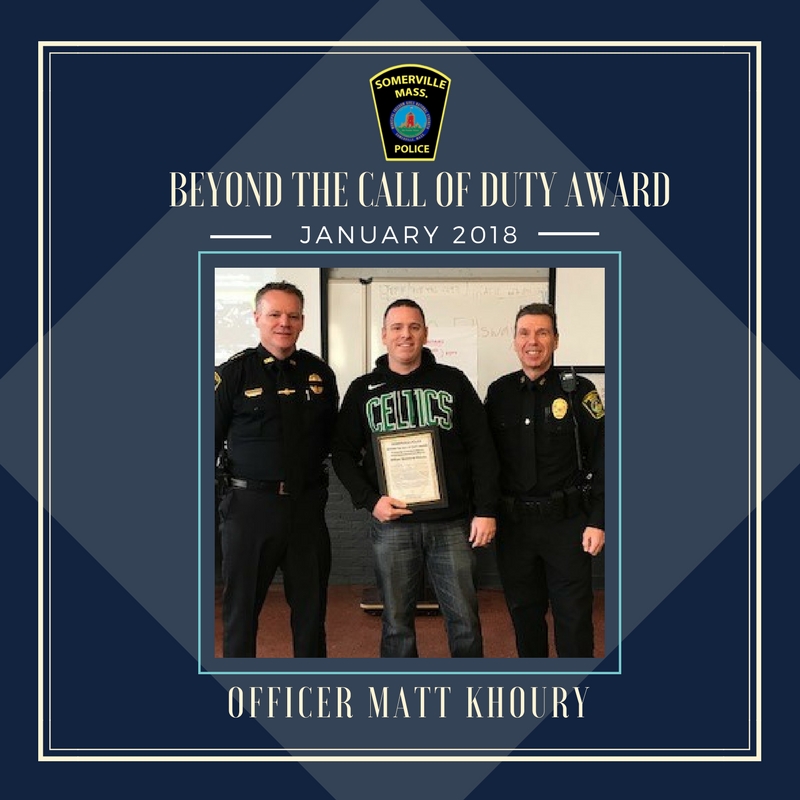 On Thursday, December 28, 2017, a man and his young son drove down from Marston Mills intending to buy a car from Tech Auto Body in Union Square. The car was for the man's son, who had worked long hours to save up the $3,000 he was going to use to buy this car. Of course, the money was all cahs and in a white envelope. You can guess where this is going.

According to Mr. Mihos, he allowed the two to take the car for a test drive, and when they returned, they couldn't find the money. They frantically looked in the car, in Tech's parking lot, and along the route, they traveled on the test drive. At one point during the drive, they got out of the car somwehre on Highland Avenue to inspect the sunroof. Unfortunately, when they returned to that spot, they were not able to locate the envelope there, either. Dejected, they returned to Tech wehre they told Mr. Mihos that they were just going to drive home. Mr. Mihos suggested that they go to the Somerville Police Station to report envelope, "just in case somebody found it and turned it in." After doing this, they started the long drive back to the Cape.

Matt Khoury happpened to be in the Statio and learned of what happened. The weather was extremely cold, but he took it upon himself to go out there to try to find the money. Sure enough, Matt was able to find the white envelope at the corner of Highland and Hamlet. One happy father and son returned to the Station, collected their money, and purchased the car. Mr. Mihos told me that he couldn't believe it. "That officer did a great job. He saved the day."

Great Job, Matt, for going above and beyond the call of duty, and thank you, Anthony, for making sure this story did not go untold.