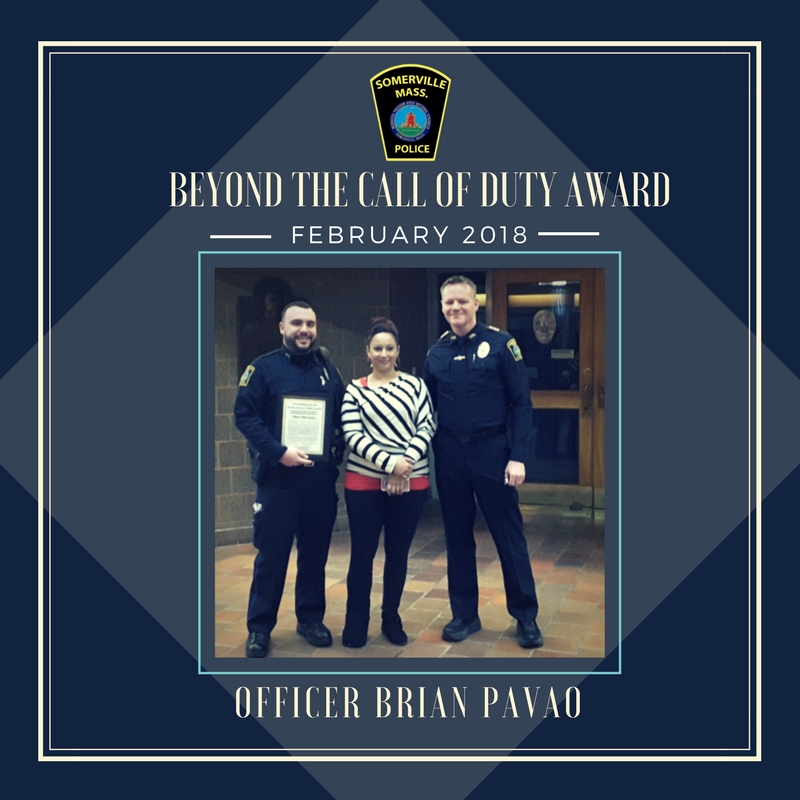 Somerville, MA----February 7th, 2018. This Beyond the Call of Duty Award is based on a recommendation from Marybeth Pero, who wanted to thank Officer Brian Pavao for his assistance on January 7. On Sunday, January 07, 2018, Marybeth Pero's 9-year-old daughter, Jyanna, ran over to Officer Pavao to ask him directions to Cambridge Hospital. Officer Pavao, who was working a detail at the corner of Webster Avenue and Newton Street, walked over to where Jyanna pointed to Mrs. Pero gasping for air.

According to Jyanna, Mrs. Pero was having an asthma attach and was unable to communicate with the officer. Marybeth struggled to breathe and unable to call 9-1-1 sought immediate help on the street. Without hesitation, Officer Pavao told Mrs. Pero and her daughter that he'd drive her directly to the hospital. With sirens on, Officer Pavao rushed them to the Emergency Room. At the ER, doctors informed Mrs. Pero that her oxygen was so low and her blood pressuer was so high they needed to start treatment right away. Officer Pavao stayed with Jyanna as ER staff worked on Mrs. Pero's treatment. After Ms. Pero's breathing returned to normal, she asked for the Officer's name and thanked him. Mrs. Pero did not forget the Officer who saved her life, she wrote to the Somerville Police's Facebook page detailing her encounter with Officer Pavao. She wanted the SPD Command Staff to know of the Officer's impact on her and Jyanna. Mrs. Pero informed us today that due to the negativity surrounding law enforcement Jyanna had nervoulsy approached the officer for help that day. However, after Officer Pavao's actions to save her mother, Jyanna now has a different view.

Great job Brian, for going above and beyond the call of duty, and thank you, Marybeth and Jyanna, for making sure this story did not go untold.