Beyond The Call of Duty Award is presented on Monday, August 22nd, 2016 for outstanding dedication and effort to: Christine Cornelio.

On August 12, 2016, Christine Cornelio received a 911 call from a Somerville resident. The caller was concerned about a mentally ill friend who was somewhere in the middle of a corn field in some Midwestern state. Yeah, that's it—somewhere in the middle of a cornfield in the Midwest. Christine, with only a cell phone number for this person, was not even able to ping it because the person had not called into the E911 center. When Christine called the number, it went directly to voice mail. She then took the initiative to reach out to the cell phone carrier, who asked her to fill out the necessary paper work for them to trace the phone and fax it in. She did what was asked of her and only received a longitude and latitude for the phone's location. While she was waiting for this information, the caller provided Christine with some more information. The friend was in the military and stationed at a base in Wisconsin. Ok, now she had: Midwest, cornfield, and maybe Wisconsin. 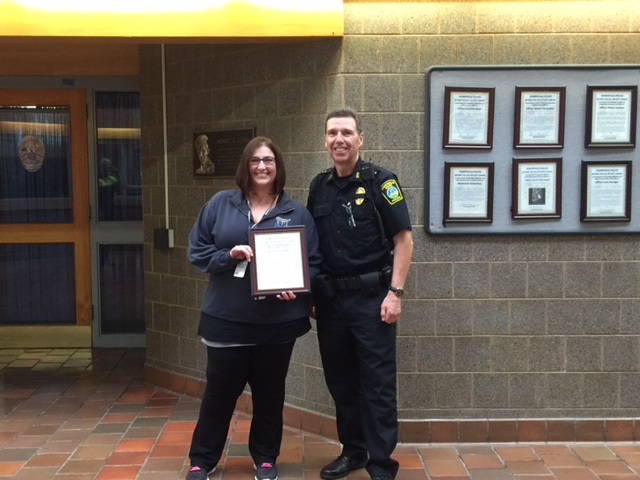 With this limited information and the longitude and latitude, Christine Googled the coordinates and linked them to a nearby military base. She did an online search and found that this base had its own police force. She again called in her request and the police force asked her to send an administrative message before they would take any action.

About an hour later, Christine received a call from the Fort McCoy Police Department in Wisconsin to inform her that the subject had been located and was en route to the hospital for a medical evaluation.

Without the hard work and determination to see this call through, this person may not have gotten the help that he needed. Based on this account by Detective Derrick Dottin, Christine is hereby recognized for her efforts for going beyond the call of duty. Great job, Christine!