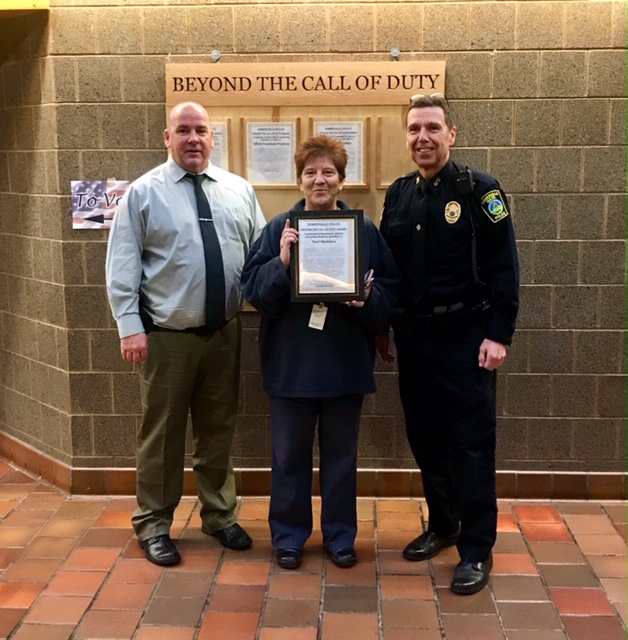 On October 30th, Ms. Medeiros, a 911 Dispatcher took a telephone call from Ms. Ortega.  Ms. Ortega is well-known to the SPD as she is usually disrespectful, and aggressive on the phone.  On this evening it was no different: Ms. Ortega shouted incomprehensively at Ms. Medeiros for over 14 minutes.  During this call Ms. Medeiros listened to Ms. Ortega, in a very calm manner, causing Ms. Ortega to calm down as the conversation continued.

A short while after the phone call, Ms. Ortega came to the lobby of the police station and continued her erratic behavior. Ms. Medeiros saw her in the lobby and rather than calling out the station officer to speak with Ms. Ortega, she spoke to Ms. Ortega, presenting herself as the 911 operator on the phone with her a few minutes before. Ms. Medeiros patiently listened as Ms. Ortega continued for another 10 minutes.  Ms. Medeiros convinced Ms. Ortega to put in writing all of her concerns and assured her that it would be delivered to the Family Services Unit.  Ms. Ortega accepted her offer, wrote her report, and left satisfied with the services she received, most importantly, without a disturbance.

Ms. Medeiros outstanding work during the calll and after demonstrates her willingness to approach a difficult situation. Ms. Medeiros  compassion, sympathy, and empathy, clearly shows that she went above and beyond the call of duty, and I ask that she be properly recognized for it.